As we draw to the end of what has been another challenging yet remarkable year for International Health Partners, we reflect on all that we’ve been able to do together to improve access to medicine for some of the world’s most vulnerable people. 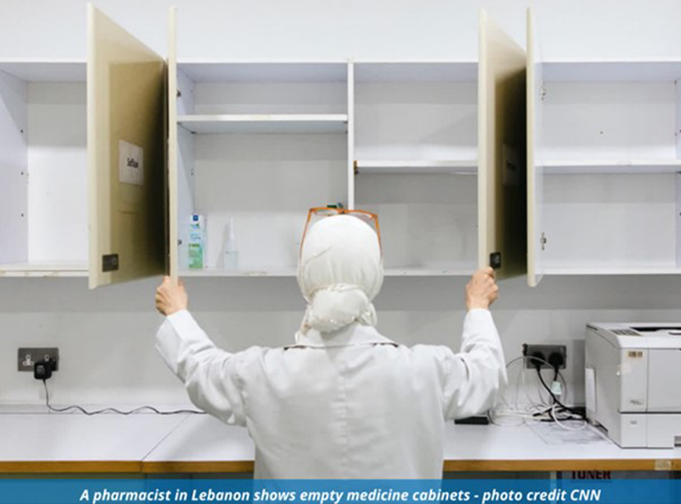 Thanks to our generous supporters, we’ve been able to ship more medicines and supplies than ever before, reaching around 6.8 million people with the medicines and health supplies they need. Here is just a snapshot of what your support has helped to do:

Scaling up to meet the increasing need in Lebanon

It has been over a year since the devastating explosion that shook Beirut’s port and the country is still struggling to recover. The blast came on top of layers of existing crisis: the COVID-19 pandemic; economic meltdown which has plunged 75% of the population into poverty; and being the country with the largest number of Syrian refugees per capita in the world.

The long-term impacts of this disaster are now hitting home as the health system faces severe medicine shortages and struggles to meet the needs of the population. Our work in Lebanon has scaled up to meet this need, and this year we have sent five shipments containing 430,834 treatments including 33,600 bottles of hand sanitiser.

“The unprecedented shortages of medicines right now are heart-breaking. So many people in Lebanon from all walks of life are desperately searching for medicines that simply aren’t available.” - Dima Zayat, Anera Lebanon’s Deputy Country Director – Nov 2021

This year we started a new partnership with World Child Cancer, an organisation working to improve diagnosis, treatment and support for children with cancer and their families, in low and middle-income countries. In countries like Malawi, fewer than 30% of children with cancer are cured due to a lack of access to oncology medicines despite many of these being easily treatable.

In September we were delighted to send our first shipment of 2,790 cancer treatments to World Child Cancer, to ensure that more children in Malawi will receive the care they need for free. We’re looking forward to expanding this partnership to new countries in the new year and increasing access to treatment for children with cancer.

Shipping essential medicines to Syria for the first time

Another new programmatic partnership, this time with the Independent Doctors Association (IDA), meant we shipped medicines to Syria for the very first time in IHP’s history.

The health outlook in Syria is bleak. Nearly a quarter of all hospitals and one third of all primary health care centres remain non-functional and unable to respond to the growing health needs. As the crisis enters its tenth year, 6.6 million people remain internally displaced and 5.6 million people have fled the country as refugees, the vast majority to neighbouring countries. The already fragile health system is overstretched with additional strain from the COVID-19 pandemic. Out of 20.5 million people in Syria, more than half of the population are in dire need of health assistance.

In September we sent our first shipment of over 86,000 treatments including antibiotics, antifungals and de-worming medication. We’re looking forward to continuing our work with IDA in 2022 to support the urgent health needs in Syria.

Since the beginning of the year, we have shipped over 24.6 million de-worming tablets to seventeen different countries, to treat children suffering from soil-transmitted helminths (STH) - parasitic infections transmitted through contaminated soil where sanitation is poor.

Despite being easily preventable and treatable, according to the World Health Organisation (WHO), more than 1.5 billion people, or 24% of the world’s population, need treatment for STH, with those living in the most deprived communities most acutely affected. Infections can cause a range of symptoms including diarrhoea, abdominal pain, malnutrition, fatigue, and impaired growth and physical development – especially in children.

These shipments form part of our wider Neglected Tropical Disease programme, in which we’re distributing over 20 million of these tablets in areas of need around the world.

It might not look like much, but this delivery of medicine marks IHP’s first ever mental health programme. Since June 2021 we have delivered almost 8,000 treatments of mental health medication to Lebanon and Gaza. Mental health is an area with massive unmet needs, widespread stigmatization, and a lack of funding compared to other healthcare areas, despite ample evidence of socioeconomic benefits. Access to treatment and services for mental health is an element of healthcare provision which is often overlooked and unequal in who it serves.

"In the past 2 years, Lebanon has witnessed unprecedented traumatic events that led to a marked rise in the number of Lebanese people suffering from mental health problems. Consequently, access to mental health medications has become of utmost importance to cope with stressful life events."

We sent 11 pallets of targeted medicines to IMC South Sudan which arrived in late January 2021. Medicine and supplies were distributed to 26 health facilities across four states, including in camps for displaced people in Upper Nile state and two of IMC's COVID-19 management facilities in Juba and Wau.

Ensuring safer births around the world

Every day, over 800 women die during pregnancy or childbirth, with women in low-income countries 300 times more likely to die than those in middle or high-income countries. Over a quarter of these deaths arise from severe bleeding, or Post-Partum Haemorrhage (PPH), during or after birth.

After weeks of confrontation in Jerusalem, hostilities between groups in Gaza and Israel erupted in May with air strikes launched on both sides. Fighting lasted 11 days before a ceasefire was agreed on Friday 21 May. More than 250 people were killed and many thousands more injured, most of them in Gaza. Six hospitals and eleven primary healthcare facilities were severely damaged by airstrikes, and one hospital was shut due to a lack of electricity, putting further strain on the healthcare system to respond to injuries and the pandemic.

In the immediate aftermath, we sent three shipments containing wide-ranging basic healthcare medicines including antibiotics and vital supplies of chronic health medicines. Since then, our work in Gaza and the West Bank has stepped up and to date we have sent eight shipments of critically needed supplies totalling 119,061 treatments.

Ethiopia's health system is in crisis under the burden of numerous challenges beyond the ongoing conflict in Tigray. Fighting has led to the displacement of over 2.7 million people, the worst outbreak of desert locusts in 25 years, recurring climate shocks such as floods and droughts, the COVID-19 pandemic, chronic food insecurity and poverty are leading to widespread need for strengthening the healthcare system to cope.

Working with our in-country NGO partner, Project Hope, we delivered 18 EHPs to Ethiopia, containing over 14,616 treatments, enough to help 4,872 people access the treatments they need.

Conflict in Yemen has resulted in a large-scale public health crisis, with a spiral of epidemic-prone infectious diseases, including the worst cholera outbreak ever recorded, alongside the ongoing COVID-19 pandemic. Humanitarian needs are rapidly increasing across the country.

Working with our in-country partner, we have reached eight health facilities (including an orphanage for boys, pictured) across four governorates in Yemen with 109,057 treatments of essential medicines to help over 36,000 people amidst the crisis.

On Saturday 14 August, a devastating 7.2 magnitude earthquake hit the island nation of Haiti, leaving 2,248 dead and 12,763 people injured. Southwestern Haiti bore the brunt, with 25 health facilities in the area completely destroyed, putting enormous strain on a healthcare system already struggling. At the time of the quake, doctors were forced to treat injured patients on stretchers underneath trees and mattresses by the side of the road.

Even before the earthquake hit, Haiti was trapped in a state of insecurity and continues to be so. Public health facilities are lacking vital medical resources, and the country is ranked 7th most vulnerable country in the world in the Vulnerability to Infectious Disease Index.

IHP’s initial response in the wake of the earthquake saw us ship 218,017 medical treatments, 1.32 million facemasks and 30 Essential Health Packs shipped in the first four weeks. Our work in Haiti is ongoing and continues to be so. This year we’ve shipped a staggering 1,591,777 treatments to Haiti and have more in line for the new year.

None of this would be possible without our supporters, our corporate partners and the tireless work of our in-country NGO partners. Thank you to everybody who has played a part in making access to healthcare for those most in need a little more attainable this year.