One year after the Haiti earthquake, IHP provides health and hope

The 7.2 magnitude earthquake in Haiti in August 2021 brought destruction to the vulnerable island. IHP was able to respond immediately with emergency medicine. A year on, we explore the situation in Haiti and discover how our work continues to provide health and hope to recovering communities. 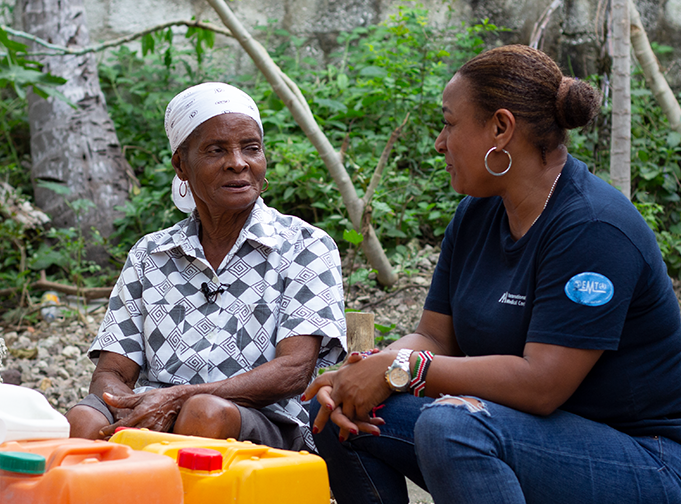 After the earthquake, destruction and devastation immediately followed the disaster, with many of the longstanding economic and political issues facing Haiti, such as financial inequality and gang violence, being compounded. More than 2,200 died and over 12,000 were injured as a direct result of the shock and more than 600,000 people were estimated to need assistance in the days after the event.

Yet this was on top of the 4.4 million people who were already in need of humanitarian aid before the disaster. The earthquake that hit the island in 2010 was devastating, killing more than 300,000 people and destroying 60% of the health system. Over a decade later, The nation never fully recovered, with many resulting issues still unresolved. Amid the escalating political and economic crisis, Haiti’s medical system was once again on the brink of collapse. This most recent earthquake did not create a humanitarian crisis as much as exacerbate an already existing one.

Haiti’s infrastructure took a huge hit from the earthquake last year, with over three hundred schools being destroyed, over 50,000 homes and shelters being obliterated, and 81,000 people losing access to their water source. Moreover, twenty-five hospitals and health facilities in the southwest were destroyed. The health consequences of this, though hard to quantify exactly, are profound. The UN estimates the economic loss from the earthquake to total over 1.5 billion US dollars, nearly 10% of the country’s gross domestic product, creating a potentially disastrous multiplier effect on the healthcare of the country. However, while the healthcare needs across the country were vast, getting people the help they needed was not an easy task.

As the headlines became dominated by the military withdrawal from Afghanistan which was unfolding around the same time as the earthquake – the situation in Haiti was largely forgotten. Without public awareness of the escalating need, it became incredibly difficult for humanitarian agencies to raise critical funds to support the relief effort.

Gang violence and the risk to quality healthcare

One of the ramifications of the disaster has been that it has illuminated some of the underlying problems facing Haitian society. According to The International Committee of the Red Cross (ICRC), more than half of the Haitians in need of humanitarian assistance – totalling 2.5 million people – live under the control of armed gangs. These gangs have regularly kidnapped and targeted aid workers and medical professionals and looted aid vehicles. Resultantly, many NGOs have suspended operations in the area. Gang violence spiked after the disaster, meaning various organisations stopped working in Haiti when the need for assistance became greatest.

Haitian gangs have entrenched themselves in society by providing services to those in need. When the government doesn’t act, and NGOs have disappeared, people turn with ever greater desperation to gangs. Yet, in the long term, gangs can’t provide Haitians with consistent, reliable and safe healthcare.

However, there are those who can. Responding quickly in the aftermath of a disaster is critical in minimising loss of life and suffering. Alongside its in-country partners, IHP was able to react quicky to the crisis with an initial shipment of 30 Essential Health Packs (EHPs) arriving within 14 days of the earthquake, with a later shipment of antibiotics and facemasks to support the initial response. Since then, we have shipped over 3.6 million treatments to Haiti.

“I always have repeated flu and fever…it’s a big problem. When my niece went to the pharmacy to get me medications, we did not pay any money”

- Marie, a beneficiary of our work -

"IHP helped a lot of people on the ground here"

Aquin Hospital in southern Haiti, the only major health facility in the region, was badly damaged by the earthquake. Five of six buildings became unsafe, but alongside our partner International Medical Corps, people were able to receive critical treatments. Its director, Dr Jacquena and hospital staff worked in outdoor tents to utilise the contents of our Essential Health Packs (EHPs), including inhalers to manage asthma, metformin to manage type II diabetes, and other medicines to manage high blood pressure and treat infections.

"There was a lot of stuff we needed," Dr Jacquena told us. "They always helped us...so we can take care of patients after their surgeries. "They [also] helped us with...the pharmacy," The medicine stock at the hospital pharmacy was critically low when the EHPs arrived. "There was a lot of medications that we did not have, and they provided them free of charge. So our patients could get those medications for free."

Many challenges in Haiti remain unsolved. It is still the poorest country in the Western Hemisphere (with close to 60% of the population living below the national poverty line), as well as one of the most inequitable in terms of wealth distribution. Many people cannot afford the cost of healthcare and choose to feed their families instead. It’s the world’s seventh most vulnerable country in terms of infectious disease giving many people a significant health burden. Yet through continuing to work on the ground, IHP is making and can continue to make a difference by providing high quality medicines to Haiti, free of charge to the patient. This is reflected in the words of the people on the ground in Haiti.

Geraldine, a nurse practitioner working in Haiti for International Medical Corps, told us that "essential medications for the community’s needs were able to be provided through the work of IHP." She expanded on this, explaining, "Through IHP’s disaster response and Essential Health Packs, we were able to provide medical resources that support the efforts to strengthen the capacity of the country’s health system."

Marie, a beneficiary of our work, spoke of what it meant for their community in Aquin to receive critical medicine "IHP helped a lot of people on the ground here...they found a solution." She concluded by expressing her wish that IHP continues operating in the area. That is exactly what we will do. IHP continues to support the long-term healthcare programmes of our partners in Haiti with shipments of essential medicine for as long as the need continues to exist.