<
Stories
>
Our planet, our health: Locust swarms and the effect on people's health

Our planet, our health: Locust swarms and the effect on people's health

The World Health Organization (WHO) estimates that more than 13 million deaths around the world each year are due to avoidable environmental causes. This includes the climate crisis, which is the single biggest health threat facing humanity. 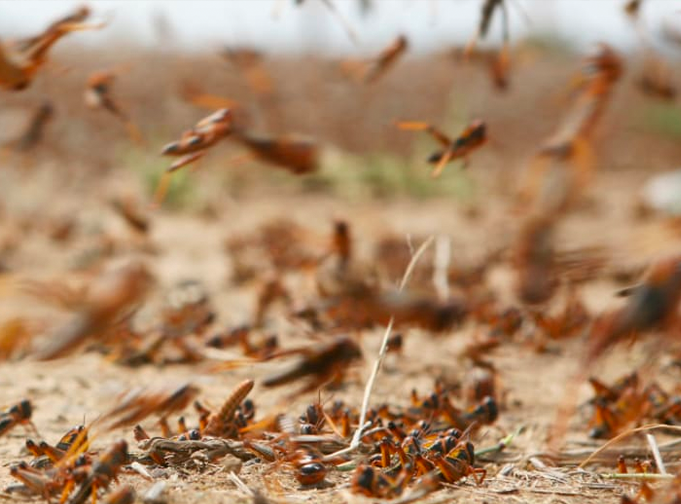 Our political, social and commercial decisions are driving the climate and health crisis. A heating world is seeing mosquitos spread diseases farther and faster than ever before. Extreme weather events, land degradation and water scarcity are displacing people and affecting their health.
‍

Take for example the locust crisis, which has been crippling communities in the Greater Horn of Africa, Arabian Peninsula and Southwest Asia since October 2019. In 2018 two anomalous cyclones emerged from the Indian Ocean, dumping severe rainfall over the Arabian Peninsula and consequently created the perfect environment for locust breeding (Stone, 2020). In 2019 the wind power of another tropical cyclone facilitated the desert locusts’ migration to the Horn of Africa.

Kenya faced the worst outbreak in 70 years. Billions of locusts devoured crops and vegetation, leaving livestock with insufficient feed and 20 million people in the abyss of food insecurity (FAO, 2022).

95.8% of the pesticides used in Kenya are scientifically proven to cause serious harm to humans and non-target animals

Events like this are having a direct impact on people’s health.

The pesticides employed to deal with the crisis in Kenya for example, were known to be highly hazardous to people’s health. Following the intervention of The UN Food and Agriculture Organization (FAO) in Kenya, four pesticides - chlorpyrifos, fenitrothion, malathion and deltamethrin – were sprayed to eradicate the locusts. All four chemicals are categorised as highly hazardous, and chlorpyrifos and fenitrothion are banned in the EU.
‍

An analysis of FAO pesticide purchase data showed that 95.8% of the pesticides used in Kenya are scientifically proven to cause serious harm to humans and non-target animals (Salzenstein, 2021).
‍

All this, despite there being a more ‘appropriate’ and non-hazardous alternative available in the form of Metarhizium, a biopesticide that affects only locusts and does not create any harm to humans or environment (EFSA, 2020). So why wasn’t Metarhizium used in Kenya? Because the very fact that it kills solely locusts makes it an unprofitable pesticide.
‍

Not only do the methods used to control these locust swarms directly impact people’s health, but the resulting food scarcity of an event like this puts people at increased risk of malnutrition.
‍

Even without the locust emergency, East Africa has the highest rate of undernutrition, which impacts 30.8% of the population.
‍

The locust infestation in East Africa could drive more than 13 million people deeper into a hunger crisis. Studies of past locust plagues also found a notable decrease in school enrolments in affected areas as well as evidence of stunting in infants and children (World Bank 2020).
‍

Without effective preventative and control measures, locust outbreaks could become a more common occurrence in East Africa. The long-term health implications of such events are potentially catastrophic.
‍

An increase in food insecurity from extreme weather events is also forcing farmers to migrate to more fertile land, creating massive internal displacement of climate refugees. Drought and floods have resulted in thousands of people losing their homes, livelihoods and land which could lead to increased conflict over the limited resources available, further straining healthcare systems not set up to deal with such scenarios.
‍

When will world governments start putting the health of people and the planet above profit? A more holistic and long-term approach must be employed to tackle climate change and the emerging effects on people’s health.