<
Stories
>
Tackling the causes and health outcomes of malnutrition

Tackling the causes and health outcomes of malnutrition

Around the world, there are unprecedented levels of hunger. Up to 45 million people are on the brink of famine, and 283 million are short of food. Hunger and malnutrition can have a catastrophic effect on people’s health. Malnutrition is the single largest cause of death among women and causes nearly half of deaths in children under five. With our partners, we’re working to tackle the causes and health outcomes of malnutrition but as the need increases, we must all do more to stop unnecessary death and suffering. 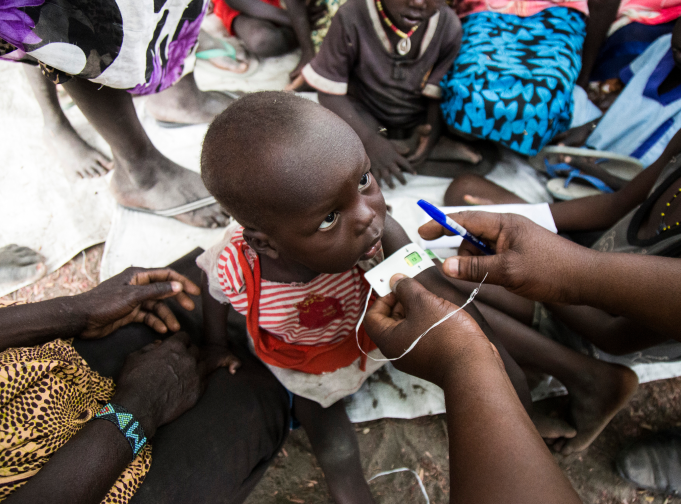 Malnutrition covers a range of nutritional problems relating to deficiency, excess and imbalance. It includes, for example, obesity and diet-related diseases. (There are 462 million underweight adults in the world, but 1.9 billion adults are overweight or obese.) More commonly, it conjures images of children with big eyes and wasted bodies. Undernourishment leaves nearly 150 million children under five stunted in growth and makes them much more vulnerable to disease and death. Low weight-for-height (wasting) indicates recent and severe weight loss, lack of food and/or infectious disease such as diarrhoea, while low height-for-age (stunting) is often a sign of chronic undernutrition. Malnutrition can also stem from a lack of vitamins and minerals.
‍

Who is affected, and why?

Malnutrition affects all countries, but women and young people are among those most at risk. Currently, an estimated £5 billion is needed to feed the 45 million people at risk of famine across 43 countries, yet as rising food prices deepen poverty and hunger, targets set in the G7 Famine Prevention Compact have not been met.
‍
‍

Some people have food to eat, but not enough, and not of good quality. The number of those undernourished has risen from 607 million in 2014 to at least 800 million today, most living in low-and-middle income countries such as those in sub-Saharan Africa and South Asia. Ongoing conflicts increase nutrition-related disease and death, while weather events (such as droughts in Afghanistan and Madagascar) erode resilience and food supplies. The rising price of cereals makes it more expensive to procure emergency food, and there have been increases in fuel costs and a shortage of containers to ship this food.

Let's take a look at the numbers:
‍

Causes and effects of malnutrition

A major cause of malnutrition is soil-transmitted helminths such as roundworms and hookworms. The WHO estimated in 2012 that 600 million school-age children needed treatment. Where sanitation is lacking, worms contaminate soil and can be ingested through food, hands and utensils. Once in, parasites prevent nutrients from being absorbed. They can cause loss of appetite, diarrhoea and dysentery. The resulting malnutrition affects growth, development and life prospects.
‍

Maternal mortality – the untimely death of women in pregnancy and childbirth – often leads to malnutrition in children: when a mother dies, her other children may not get the right food, and may be less likely to attend school regularly or hold down regular work as adults. Sub-Saharan Africa has 14% of the world’s population but 60% of all maternal deaths.

During the pandemic, food security has been severely affected in some low- and middle-income countries, with lockdowns and loss of income meaning many have to compromise on the quantity and quality of food they can afford. A report in The Lancet found strategies to respond to COVID-19 impacted food systems by disrupting the production and sale of nutritious and affordable foods, forcing millions of families to rely on nutrient-poor alternatives. As many as 6.7 million more children suffered wasting during the first 12 months of the pandemic.
‍

Malnutrition also exacerbates the effects of COVID-19, especially in mothers and children. Acute and chronic malnutrition significantly increases risks of bacterial and viral infection and can increase illness severity. Those who are malnourished, in short, have a worse prognosis.
‍

How IHP’s work is helping to combat malnutrition

Malnutrition can increase the costs of health care for families and slow economic growth for communities. By providing essential medicines, available for free to patients, IHP is helping to reduce its risks and mitigate its effects.
‍

One example is our deworming programme, tackling causes of malnutrition. Last year we distributed 24.6 million deworming tablets across 17 countries. In Ethiopia, our partner Project Hope has distributed about 5.3 million mebendazole tablets to reach thousands of children in several regions. “Using these donated medicines, malnutrition will be prevented [and] mortality and morbidity of children will be decreased by preventing illnesses like anaemia,” it told us.
‍

The distribution of antibiotics, antiparasitic medication and multivitamins are also combating the effects of malnutrition. Amoxicillin is a key antibiotic to treat acute malnutrition, helping reduce deaths in young children. In Malawi, we distributed donated medicines including amoxicillin through our partner Inter Care. Sister Elizabeth runs the nutritional recovery unit it supports in Nsipe and told us: “There is a strong link between malnutrition and other illnesses. Children pick up infections and that worsens their body’s ability to absorb nutrients. Malnutrition also weakens their immunity and makes them prone to infections. It is a reinforcing cycle. Amoxicillin is a really important drug … to break the pattern.”

IHP also supplies medication to treat postpartum haemorrhage, severe childbirth-related bleeding that can cause a mother’s death. This is the most frequent cause of maternal death and arguably the most preventable. By reducing deaths, we are helping to ensure better prospects for children at risk of malnourishment.

As more people suffer hunger and become at risk of malnutrition, IHP is scaling up its work to meet this increasing need. We depend on donations to support this vital work. Donate to help to prevent malnutrition and give people around the world the chance to stay healthy.